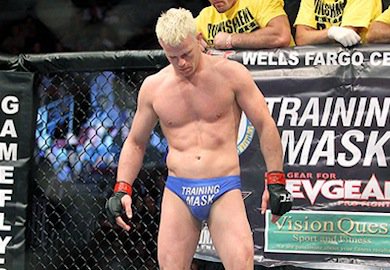 After missing weight for the UFC on FX: Browne vs. Silva event, UFC veteran Dennis Hallman was released from his contract. Also, his opponent, Thiago Tavares was removed from the card with no opponent. Hallman has fought in several different weight classes but as of his last bout and his expected bout with Tavares, he fought at lightweight and missed weight for both fights.

As for his most recent mishap cutting weight, Hallman has blamed personal problems that he intends to keep private. He had told Dana White prior to being cut and stated that White understood and gave him both his show money and his win bonus for the scheduled fight with Tavares.

In a conversation with MMA Fighting, Hallman gave the details (save for his ‘personal issues’) about why he withdrew from his upcoming fight on the eve of the event…Continue reading on page 2.

…Hallman reportedly passed out during his weight cut and ballooned up 7 pounds over the limit after being given an I.V. Hallman had been just two pounds overweight prior to passing out and even dropped within three pounds of a potential catchweight fight that Tavares had agreed upon according to Hallman. After Hallman notified Tavares of his weight drop, Tavares asked that Hallman drop one more pound to make a catchweight fight feasible.

Once asked to continue cutting weight Hallman spoke with Dana White and asked to be removed from the card in a move that surely held implications of being cut from the UFC for Hallman. However, Hallman chose to deal with his personal issues and refused to cut anymore weight.

Hallman has been fighting in MMA for over 16 years and has competed in 80+ fights during that time under various promotional banners. Now, he must deal with his issues and fight on the regional circuit to work his way back to the UFC. In his latest UFC stint, Hallman went 3-2 and at 36-years old, this is a major blow to Hallman’s career.

As for Tavares, he will receive his show money and will be relocated to a new card.