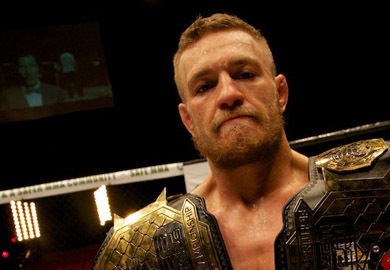 ‘Notorious’ Conor McGregor is gearing up for his fight against Dustin Poirier this Saturday at UFC 178. Two fights after his, in the main event, Demetrious Johnson will take on Chris Cariaso for the flyweight title.

Johnson joined Ariel Helwani on The MMA Hour to discuss the event, including what his thoughts were on the Irishman.

“Like, I look at him and I don’t see him talking trash. I look at him and I see him talking (about) what he sees, where he’s like: ‘dude, I’m way faster, I move way better than you do, you’re slow, I’m going to hit you hard’ — which, I believe all these things that he says are true. Like, I believe that his fighting style is good, he understands fighting, and not taking anything away from Dustin Poirier — Dustin Poirier is a huge test — I can appreciate somebody who can talk that stuff and he’ll go in there and he’ll back it up.”

“The curious thing will be like, what if he loses? They have so much hype behind Conor McGregor. If he loses then, you know, they’ll look around like, ‘Well, we had a good run, Conor. Let’s see what you got to say again.’

“So I’m more intrigued by that fight because I think that fight has more stakes going into it, because it’s like, one, I’m pretty sure if Conor wins it, then he can be fighting ‘old man Swanson,’ as he called him, Cub Swanson next. And then, who knows, he could be fighting Chad Mendes or Jose Aldo for the title after those two fight. We’ll see.”

McGregor is currently on an 11-fight win streak that goes back to 2011. Since entering the UFC in 2013, McGregor has gone 3-0, with two of his fights ending by way of TKO. With a win over #5 ranked Poirier, McGregor will be making a very strong campaign for why he deserves a title shot.

What are your thoughts on McGregor’s trash talking?