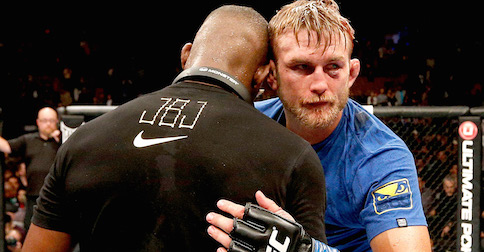 Alexander Gustafsson and Jon Jones have a special kind of bond, one that can only be forged by a costly blood-bath of a five-round UFC title fight.

In the wake of the Jones drug testing scandal, Gustafsson has a powerful message for his career nemesis in Jon Jones.

Check it: (via MMAfighting.com)

“It is bad for the sport, bad for the organization. We’re supposed to be role models. You’re supposed to stay above that sort of thing… Every single reporter asks me about Jones. All of them. I can’t bother to think about Jon Jones right now, I have a very dangerous opponent in front of me.”