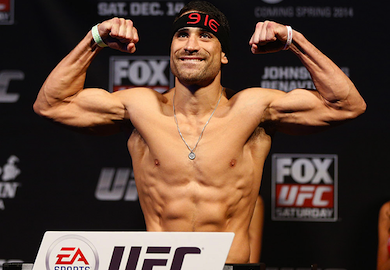 UFC lightweight and member of Team Alpha Male Danny Castillo will fight Isaac Vallie-Flagg at UFC 172, which takes place in Baltimore on April 26. The UFC announced the fight on Thursday.

Castillo is looking to bounce back from his unanimous decision loss to Edson Barboza back in December. Before that loss Castillo had a two fight win streak going and will look to get back on the right track in April.

Vallie-Flagg fought last month at UFC Fight Night 35, where he also had a winning streak snapped when he lost to Elias Silverio. Both fighters will be looking to avoid a two fight losing streak.