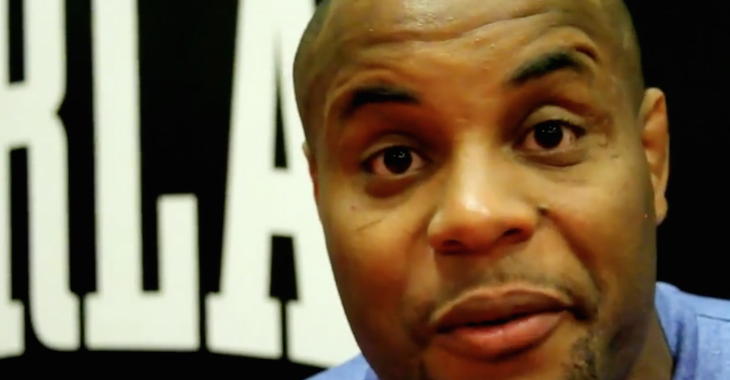 In part two of his interview with BJPENN.COM reporter Layzie The Savage, UFC light-heavyweight Daniel Cormier talks about women’s bantamweight champion, Ronda Rousey, and who he thinks will be able to challenge her.

Cormier also spoke about Anderson Silva’s failed drug tests and what that will do to his legacy. Check out some of the highlights below.

D.C. says he has nothing but love for Rousey and thinks she is truly a special athlete. Here’s what Cormier had to say about the women’s bantamweight division and who he thinks will be able to put up a fight against ‘Rowdy’.

As far as  the division, D.C. thinks that everyone else is just trying to catch up and get to the same level as Rousey.

“These girls are a world behind her and it’s because of her lifetime of competition.”

“I think at some point she needs to get pushed a little bit more to validate the division a little bit more, she needs challengers. That’s why I’m not opposed to another Miesha Tate fight. Miesha Tate’s able to get out of the first round and even if he beats Miesha again and submits her again in the third or fourth round, it doesn’t matter, you get to see her deal with a little bit of adversity over the course of a fight. As a Ronda Rousey fan, I don’t want to see her get beat or anything but I would much rather see someone able to compete with her, but it’s her job to insure that that doesn’t happen.”

One name that comes up constantly is Cris Cyborg. Cormier thinks that she would go in a fight with Rousey and defiantly try to hurt her, but at the end of the day he doesn’t see her being able to deal with the grappling and ground game of Rousey.

“As much as we all love Cyborg, people want to say Cyborg, Cyborg, Cyborg. She may go in there and try to punch Ronda’s head off, but the moment Ronda grabs her and throws her down it’s going to end up being over again because these girls get lost in these scrambles, just like Cat [Zingano].”

“She would go in there with evil intention, she may get some big punches off, but the moment they come in to contact and they start rolling around Ronda will be 1,2,3,4,5. Where the other girls trying to process whats happening. Before you know it they’re tapping out.”

Cormier also spoke about a former UFC champion, and longtime considered the greatest fighter of all time, Anderson Silva. Cormier admits it’s disappointing that Silva failed the drug tests prior to his bout with Nick Diaz but says that it’s up to everyone to make their own decisions as to whether it tarnishes his legacy or not.

“Very disappointed. This is guy, who for a long time, he was considered the greatest fighter of all time and that doesn’t stop that. It just puts a cloud over it. People have to question what was going on this whole time and if you don’t then that’s unfair to everybody that’s watched the sport. You owe it to yourself as an athlete, as a fan to say well what if he wasn’t competing clean this whole time and if that what if tells you that it should skew everything that he’s done then that’s ok, that’s your opinion. But for some people it doesn’t matter. What he did inside the octagon was so special that it doesn’t matter. I don’t advocate cheating, I think it was bad what he did, but you know what man he will be judged in the court of public opinion, he will judged by the Nevada State Athletic Commission and then we’ll see what happens from there.”

When asked if he thinks Silva would ever fight again he said, “You can always get people to tune in to an Anderson Silva fight.”
By: Ryan C. Miller | @ryancmiller1630