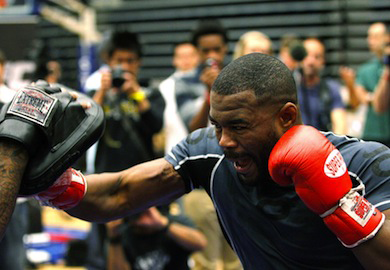 Daniel Cormier was one of the fighters to attend the UFC media luncheon this past week and he made some bold statements, comparing Evans’ abilities to Jones’. MMAMania transcribed:

“I think Rashad is actually a little more difficult to take down for me than it would be for a guy with longer limbs. I don’t mind wrestling a guy with long limbs, I think it works to my advantage, because I can get to their legs. Rashad doesn’t kick as much. Kicking actually feeds your opponent the leg. Jon kicks more, so that’s easier to grab takedowns. Rashad, he’s a more dynamic type of fighter in terms of one-punch knockout power. He has more than Jones does. Explosiveness, he’s a little faster in that sense. Jon is great, but he works at his pace. He fights at his pace. I dunno if he’s ever put anybody out on their feet. He gets on top and kinda pounds guys out. That’s one tool that actually goes out the window against me, because he can’t score a takedown.”

Daniel Cormier will be making his light heavyweight debut at UFC 170 against former division champion Rashad Evans in February.

If Cormier happens to make it past Evans, would that be a tougher matchup than a potential bout with Jon Jones? Who is the tougher opponent: Jon Jones or Rashad Evans? Share your thoughts in the comment section below!