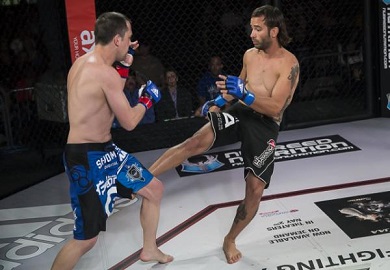 Last month veteran referee Mike Beltran disqualified Danny Aguiar at RFA 15 for ‘timidity’ something rarely seen in the MMA world. Yesterday Aguiar joined MMAJunkie.com to speak about the incident, and why he doesn’t deserve the hate he is receiving because of it.

What happened in the fight against Sam Toomer? The referee said you wouldn’t get up and engage. Were you hurt?
You’re right. That’s exactly what happened. No one is taking my side. Everyone is against me. I’d like to fight some more and earn my way back. Certainly there are a lot of promotions out there, but RFA is my home. I was planning on winning their belt and going to the UFC. I was well focused and well trained.

What was the nature of the injury against Toomer, who is a former training partner of yours?
During the first round, my intention wasn’t to chase him, but to goad him into attacking me. But when I did chase him, he struck my leg and hurt me early on. Thankfully, it turned out to be only a muscle injury. It was a calf injury. My doctor said that in this type of situation, a leg break would be very likely, not unlike Anderson Silva’s fracture. I took the most damage on the third round; there were several kicks to the same spot. It’s hard for people on the outside to understand. When you’re hurt, only you know how badly. When was 20, in Brazil, I was robbed and shot in the back. I had never felt such much pain in my life as I felt after being kicked so many times to the leg. I even had to go on morphine at the hospital. Imagine that. I had never morphine in my entire life, even when I was shot. No one truly understands what happens behind the curtains. I was told that I fought like Royce Gracie in 1995. But I love that comparison. He’s the one who opened up the sport for us. Some folks said I had no muay Thai or wrestling, only jiu-jitsu. But these aren’t fighters talking. They’re just talking heads. No real fighter gave me a hard time. Ultimately, I was there to do what I love. I love to fight. I don’t fight for money. I did all I could do. I was hurt in the fight. I had no condition to continue, but I never gave up.

Do you believe a TKO loss would have been more fair than a DQ?
I don’t know how I feel about that. One way of looking at it is the fact that I wasn’t knocked out or submitted. I tried to fight until the end. Also, things are different now. Before, there was fewer rules and no time limits. In a situation like that, you’re obligated to finish your opponent. But that’s not the case nowadays, of course. I feel like I showed up to fight but never got to fight. He won the fight by disqualification, but never knocked me out. I would have preferred that. Ever since I started judo at seven years of age, martial arts have always meant defending my life, whether in a cage or on the streets. The goal is to defend myself and be alive at the end. My outlook on fighting is never to stop until my opponent is knocked out of submitted. Now that we live in the age of modern MMA, my preference, without a doubt, would have been to have been knocked out or submitted. Of course, my parents wouldn’t want to see me twitching on the canvas, but that’s what fans pay to see. Against Toomer, he never finished me; he didn’t beat me up.

Were you able to listen to referee Mike Beltran’s verbal instructions?
It was very loud in there. He could barely hear me. I was asked if I could still fight. I said that I could indeed continue.

Some fans compared your disqualification to Nick Serra’s last fight. What are your thoughts on that?
People want me to stop fighting. People want me to feel shame. But before judging someone, put on their shoes, walk the along paths they’ve walked, scale the mountains they’ve scaled, and climb out of the pitfalls in which they’ve fallen. I’ve gone though a lot in my life. This is nothing by comparison. I’m overcoming this challenge. I’ll be fighting again soon. I’ll win that fight and the same people who badmouth me will come and congratulate me. That’s how sports are. If you win, everything is fine. If you lose, nothing is fine.

How’s your friendship with Sam Toomer?
I have no problem with him. I don’t consider him a friend now. I consider him an opponent.

Would you like to rematch against Toomer?
Without a doubt. This bout is perfect for a rematch since a real fight didn’t happen. No one did anything. One combatant was injured and that resulted in a disqualification. So no one was knocked out, submitted or even won by points. And the fight was stopped 25 seconds before the end of the third round. On “Inside MMA,” Beltran stated that I was flopping to avoid the standup. In those 25 seconds, I still had a chance to win by submission.

Your previous fight was a victory over UFC vet Tyler Toner. Can you talk about that?
Tyler Toner is a known fighter with a history of knockout wins. He’s very good, and I submitted him in 29 seconds. It was so fast some people didn’t even see it. They loved my entrance on TV. I have a persona I created – the snake. Everyone was talking about me, even his fans. Without a doubt, I brought a lot of eyes to the promotion.