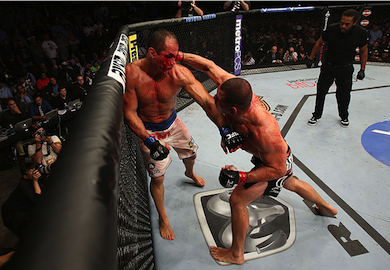 “I’m not a doctor, but that fight should have been stopped in the third round. I’m not a doctor, but let me tell you what I am: I’ve been around a lot of men who were too tough for their own good. And Junior dos Santos is one of those guys. I mean that with the utmost respect.”

“There’s no need for a young, talented guy to take that kind of punishment when he’s out on his feet. I was kind of hoping somebody was going to throw the towel in or the ref would stop it, or the doctor was going to stop it. One eye was closed, and the other was cut wide open. He was hurt.”

“If you looked at the fight, it ended in the fifth. That guy took seven, eight minutes more punishment that he didn’t need to take until it ended. That’s seven or eight minutes, I don’t know man. I just don’t like it.”

UFC President Dana White believes that, despite his heart, Junior dos Santos took too much punishment in his UFC 166 main event loss to Cain Velasquez.

After nearly five dominant rounds, Cain Velasquez was able to get the bout stopped in the fifth and retain his title via TKO.