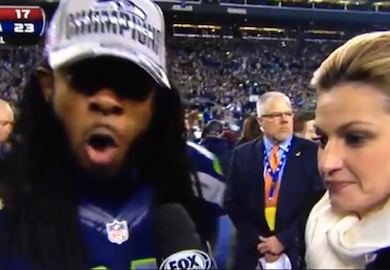 “Nope [I didn’t say anything to Ronda Rousey about not shaking Miesha Tate’s hand after UFC 168]. That was her own decision. It’s not about being an ungracious winner … Ronda said it best. She said, ‘I didn’t like her before the fight, I definitely don’t like her after the fight, and nobody is going to boo me into shaking her hand.’ Period. End of story. And as far as the Richard Sherman thing goes, that was awesome! The guy has probably been playing football since he was eight years old, dreamed about going to the Super Bowl and goes head-to-head against the guy who was trash talking him. And he pulls off, in my opinion, the best play of the game to send his team to the Super Bowl — that was a touchdown pass. He was fired up, got on TV (watch him lose his mind here) and let everyone know about it. I wish the Patriots were that fired up that day…. I disagree (that I would publicly support anything Ronda did). I’m sure there a lot of things she could do that I wouldn’t publicly support, but [the no handshake] isn’t one of them. She hates Miesha Tate … they don’t like each other. Ronda is mean and nasty, that’s who she is. And she couldn’t care less what anyone thinks.”

This one’s for the football fans.

If you saw last weekend’s game between the Seahawks and the ‘Niners’ and you watched it through, we at home got a surprising and unexpected dose of Richard Sherman (pictured).

Not only did Sherman synch up Seattle’s bid to the Superbowl, but he then proceeded to go absolutely nutty on the field and to the FOX media crew standing by.

People are calling him a poor sport. But the UFC boss says no way is Sherman like Rousey.

(Quote via The Ticket Radio show. Transcription props to mmamania.com)