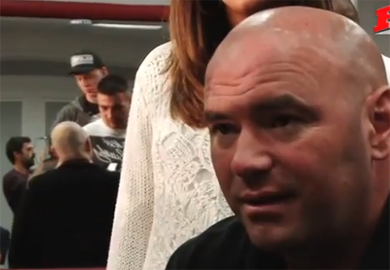 DUBLIN: @danawhite suffered a bad attack during the Trinity award ceremony, thx for support & understanding, we’ll be back soon, luv u guys

UFC president Dana White is in Dublin, Ireland this week to receive an honorary award from Trinity College. Yesterday, Dana he arrived in Dublin with sidekick Nick the Tooth, and spent the evening hanging out with Irish fans at the local Temple Bar. Today, he attended a ceremony at Trinity College to accept an honorary award, where he delivered an acceptance speech to the crowd. While the ceremony was taking place, Dana suffered a bad bout of Meniere’s Disease. He has been battling with this disease for some time now, and recently underwent surgery to help repair it. As you can see in the twitter post above, Dana seems to be okay, and Nick the Tooth tells his followers they will “be back soon”.

In case you aren’t familiar with Meniere’s Disease, it is an inner ear disorder that affects balance and hearing. Severe dizziness and vertigo are common symptoms, and they can be intensified after air travel (high altitude). There is no known cure for the disease, but it can be treated with medication, surgery, and lifestyle changes.