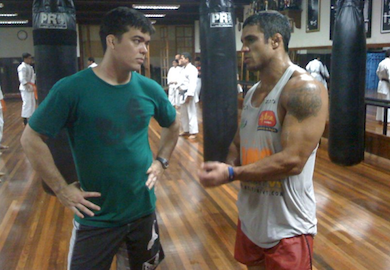 Lyoto Machida needed all of three minutes to make a name for himself in the UFC Middleweight division. He may already have a title-contention fight lined up for him after such a successful 185 debut.

After refusing to move down to the middleweight division due to his friend and training partner Anderson Silva reigning supreme over all competition, the question remained whether Machida could cut it in that class. After Silva lost to Weidman, a number of possibilities presented themselves for Machida to make his 185 lb. debut.

Machida was originally lined up to debut against Tim Kennedy at UFC Fight for the Troops 3, but he was pulled out after it was announced Michael Bisping suffered a career-threatening injury. Machida would replace Bisping in the main-event of UFC Fight Night 30 against Mark Munoz.

Machida controlled the octagon well in his fight with Munoz, only having to throw two significant strikes before he connected with his headkick knockout. Munoz was out-cold, looking at the lights and not defending himself. Machida showed great sportsmanship by not following up with extra blows and let the referee call a stop to the fight.

At the UFC Fight Night 30 post fight press conference, Dana White stated that he loves the idea of Lyoto Machida going up against Vitor Belfort next.

Vitor Belfort is getting ready to fight Dan Henderson at UFC Fight Night 32 on November 9th. He is on a two fight winning streak, finishing both Michael Bisping and Luke Rockhold.