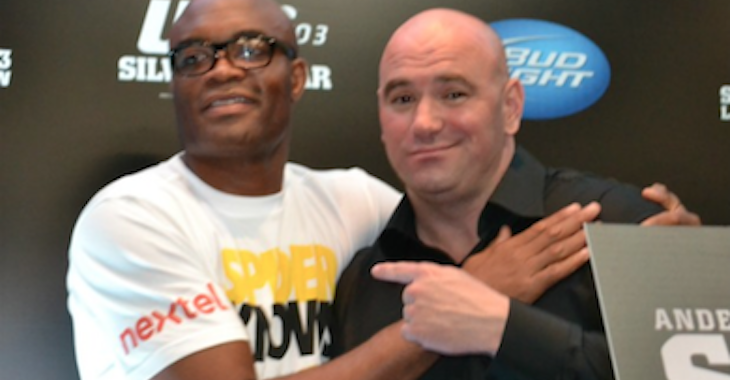 UFC President Dana White insists that the UFC is going to continue supporting former middleweight king Anderson Silva. Despite having failed several drug test, both before and after his fight with Nick Diaz, White said on Saturday that regardless how it all plays out the UFC will have Silva’s back.

“Anderson has been a huge part of this company and regardless of how this thing comes out, we’re going to support the guy.”

We won’t know what kind of penalty Silva will face from the Nevada State Athletic Commission, but White said that reports of him possibly facing a 18 month suspension aren’t accurate and he doesn’t believe that it will come to that.

“He’s going to go before the Nevada Athletic Commission and I have no idea what’s going to happen. I know there were some rumors down here that he’s only going to get 18 months. I don’t believe that’s true and I don’t know how anyone would know anything like that. That’s just a rumor. We’ll see what happens when he goes before the commission.”

What do you guys think will happen to the Spider?