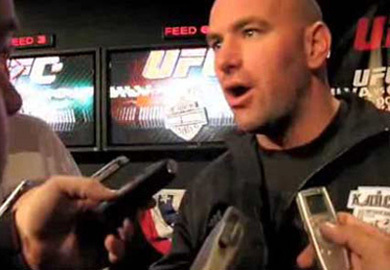 A large portion of mixed martial arts fans and media have speculated that the recently announced bout between current UFC light heavyweight champion Jon Jones and former middleweight #1 contender Chael Sonnen, was put together in order to help boost the recently poor ratings of the Ultimate Fighter (TUF) franchise.

But according to UFC president Dana White, those ‘speculators’ don’t know what the [expletive] they’re talking about and neither does the internet.

Here is what the UFC President had to say via yahoo sports:

“This wasn’t where I was going. But when this happened and Jones was going to be out for so long, it made sense. I understand completely [about Sonnen not having won a fight at light heavyweight], but it’s a fight people want to see. That’s what the word is, that TUF needs the help? People love to speculate and talk [expletive], but the truth of it is, they don’t know what the [expletive] they’re talking about. I have all the answers. The Internet does not. We built this company and we know what we’re doing. That had nothing to do with it.”

Wether it was the UFC’s intention or not, there is no denying that pitting “Bones” and “The American Gangster” as TUF 17 coaches will surely boost “TUF” ratings. Not to mention the pay-per-view numbers that will be generated as a result of the two coaches squaring off on April 27th at a location to be named later.

Be sure to get some answers from ‘the man who has them all’ during todays “Jones vs. Sonnen” media call. The call airs live on bjpenn.com at 4pm ET.