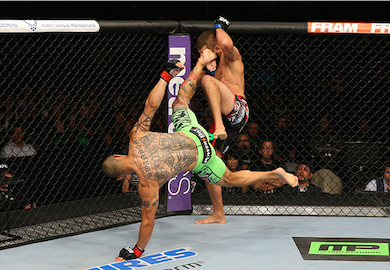 UFC President Dana White hinted at Cub Swanson getting a title shot when he spoke to The Download earlier today.

“Let me tell you what, Jeremy is ranked No. 10 but he’s not the number 10 fighter. He’s better than that, and Cub took big f****** shots from him early, ate his shots and came back and fought a beautiful fight. I’m very excited for his future. Cub’s going to get what he wants, let’s just put it that way.”

Cub Swanson defeated Jeremy Stephens this past Saturday. Prior to the event, Dana White said the winner would likely get a title shot.

Chad Mendes will be fighting Jose Aldo at UFC 176 on August 2nd, the winner of that bout will likely fight Swanson.