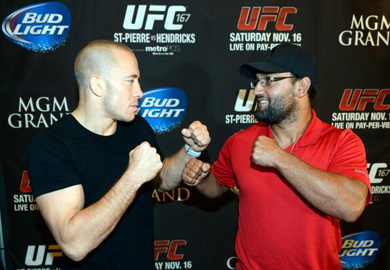 “I think it makes them both look stupid. These guys are going to get tested by the athletic commission. This is something that Georges St. Pierre wants to prove to everybody. When he fought B.J. (Penn), B.J. talked smack about him. Other people have talked stuff. The kid, not only is he another guy that’s been with us since day one, he’s never tested positive for anything even remotely close to anything bad. He’s never tested positive for anything. He’s always been a straight shooter and always professional, yet people keep talking smack about him. I just think it’s crazy for him to even do this.”