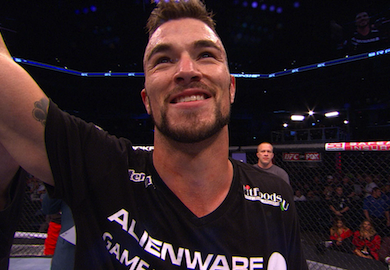 “(Thatch was impressive), especially how good he looked with who he was fighting, and what he did to who he was fighting,” White told a small group of reporters following the UFC Fight Night 32 post-event news conference. “I have a lot of respect for Thiago. (Thatch) hunted him down and stayed right in his face. Paulo Thiago knocked out (Josh) Koscheck and brutalized Mike Swick, and this kid stays right in his face and keeps going after him. I like this kid… Stud, Fucking Stud.”

Two fights into his UFC career and Brandon Thatch already has the full undivided attention of the UFC President Dana White.