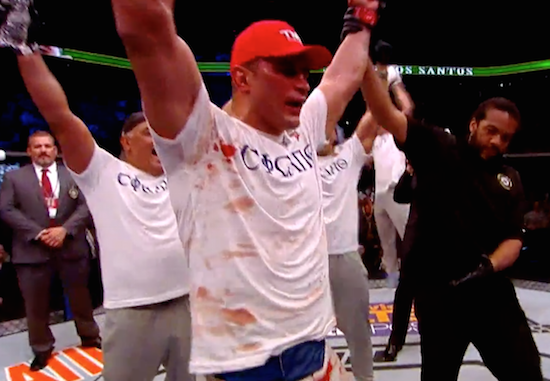 UFC President Dana White spoke after the bout about what’s next for Dos Santos.

“That was the right decision. But let me tell you what: [dos Santos] slowed down a lot, he took some big shots tonight. His eye starts to swell up and his cheekbones start to swell up and that was early. If that was a three-round fight, Stipe wins that fight. Junior got busted up early and the guy has so much heart. He just keeps coming. No matter what you hit this guy with, no matter how hard you hit him, he just keeps moving forward. He’s so hard to put away. Where does this put him right now? I don’t know [Fabricio] Werdum is going to fight Cain Velasquez, and then we’ll see where we go from there. After the fight tonight… I‘m no doctor, but I don’t see Junior fighting anytime soon.”

You can catch the bout highlights HERE in case you missed it.