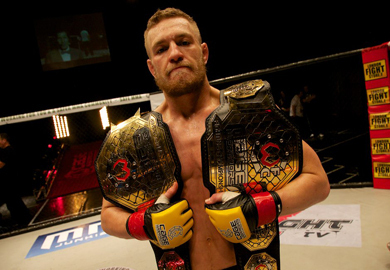 After making a statement in his UFC debut by knocking out Marcus Brimage in just 67-seconds, featherweight Conor McGregor (13-2 MMA, 1-0 UFC) was asked if he was concerned about being fed to the wolves too early in his career.

“I am a wolf!” stated the Dublin native.

McGregor arrived in Boston yesterday, ahead of his fight Saturday night vs. Max Holloway (7-2 MMA, 3-2 UFC), with more hype surrounding him than almost anyone ever fighting in just their second UFC bout:

“You’ve got that right,” said UFC president Dana White. “Other than Brock Lesnar.”