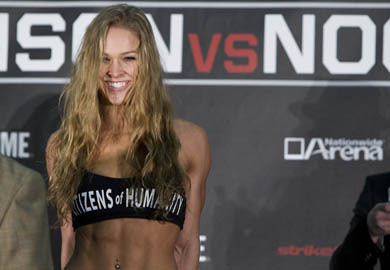 At one point in time, not so far in our past, the UFC boss was completely against brining in a female division to the UFC. However, one superstar full of marketing potential in the form of Strikeforce bantamweight champion, Ronda Rousey, has given White not only a change in perspective but an entire 180 from his previous stance.

“It’s absolutely going to happen,” White stated to SI.com when questioned about WMMA in the UFC. His stance on bringing Rousey in? “Could happen tomorrow, it could happen a year from now,” he said.

The only way Ronda could make the move to the UFC tomorrow would be for Strikeforce to cancel/sell her contract to the UFC or go out of business.

As it sits, the bantamweight champion still has an additional three-fights on her contract with the Strikeforce promotion and until those fights are fulfilled or the above conditions met, she is a Strikeforce fighter and White cannot touch her.