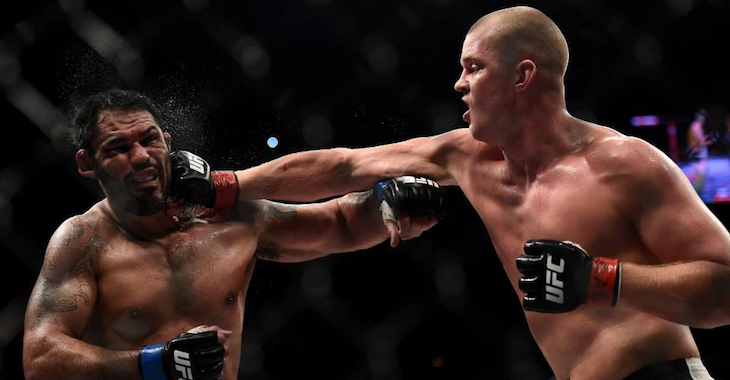 “UFC 190” may have been the last time Antonio Rodrigo “Minotauro” Nogueira stepped into the octagon.

Nogueira clearly isn’t the fighter he used to be during his PRIDE days, and his performance against Stefan Struve reflected that on Saturday night. The judges of Brazil rewarded “Skyscraper” the easy unanimous decision victory, but “Big Nog” still walked out of the octagon with his head held high and to a loud crowd.

After the event’s conclusion, UFC President Dana White revealed he had already talked with “Big Nog” and they agreed that it was likely time for him to hang up his gloves.

“I love ‘Big Nog’, and I think everybody loves ‘Big Nog’. He is such a good guy,” White said after UFC 190. “He is respected by everybody. He and I actually talked tonight and I’m done— I don’t want to see him fight anymore… He doesn’t disagree.”

White acknowledges just how much Nogueira has done for the sport and he will be giving him a job with corporate UFC if he decides to retire. “He and I are going to get together and talk. I’m probably going to give him the Chuck Liddell, Matt Hughes and Forrest Griffin deal,” White said. “I’m going to bring him in and make him an employee.”

Does “Big Nog” have one more fight in him, or is it time to call it quits? Share your thoughts in the comment section below!