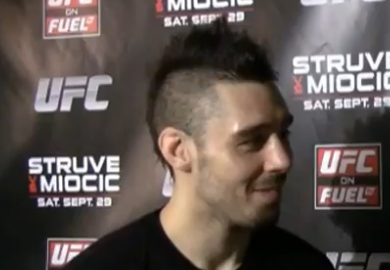 There’s been a lot of speculation online in the last 24 hours or so regarding Mr Hardy being forced out of his fight with Matt Brown next month, so I wanted to clarify the situation and provide some details.

On Tuesday this week Dan went and had his medicals done as per normal, however because the fight is in California there was an EKG performed as well as the usual standard medicals done in every other states (normally; blood work, physical, MRI, etc).

On Wednesday his EKG results came back showing an irregularity which has been diagnosed as Wolff Parkinson White Syndrome, which incidentally my wife also suffers from. However unlike my wife who has symptoms of the syndrome (including heart palpitations and tachycardia), Dan has never shown any symptoms of the syndrome and therefore it has come as a surprise to us all as this is something you are born with, rather than develop.

Since this news, Dan has been back to hospital and had several tests run on him with a cardiologist, which included an Ultrasound as well as a high-level stress test to study his heart and how it responds to exercise. To say Dan has a very strong and healthy heart would be an understatement! The tests he did not only showed he has a phenomenal resting heart rate of 42bpm, but he also broke the record for the stress test he did which was held by a marathon runner for over a year.

Sadly the commission will not clear him for the fight with Brown so the UFC were forced to draft in Jordan Mein as a replacement for Dan. It’s a great shame that the athletic commission simply take a reading from an EKG and decide whether he can or cannot fight, rather than looking at the evidence of the last 30 years of Dan’s life without a single symptom of the syndrome, the 10 year sports career he’s had, and the tests he’s also performed this week…….amongst other things.

As you can imagine with everything (we felt) stacked in our favour, the “not cleared to fight” message we received was a very big shock, particularly after 10 years of competition and no issues. Anyway right now we’re talking to the UFC about what’s next and we’ll keep everyone updated as and when we have further information.