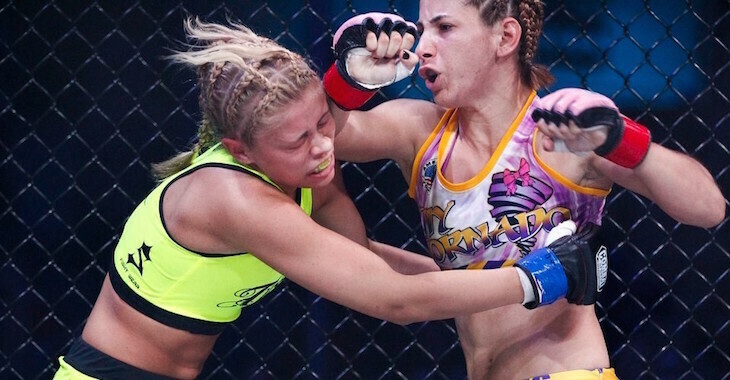 Paige VanZant is quickly becoming one of the most popular fighters in the UFC’s young women’s strawweight division.

VanZant’s victory over “Lil Bulldog” moved her in to the strawweight divisions top-10, inching the budding star ever closer to a UFC title shot.

With that said, fellow UFC strawweight contender Tecia Torres (5-0 MMA), who holds a victory over VanZant while fighting under the Invicta FC banner, thinks it would be crazy for “PVZ” to get a title shot. Her words:

“If she got a title shot, I think that would be crazy,” Torres said Tuesday at a media lunch in Downtown LA (via MMAFighting.com). “I don’t think ‘Daddy Dana’ would give her a title shot, because he doesn’t want to see her die.”

Torres defeated VanZant in January of 2013 via unanimous decision. She also holds a win over the aforementioned Herrig, which explains why she was not to fond of the treatment her two former opponents received at UFC on FOX 15:

“People are going to say I’m jealous, but I’m going to say it: Yeah, I was a little jealous,” Torres said. “I’m fighting in Mexico City, I’m excited about it. I don’t even know if I’m on the main card in that yet.

“It’s kind of crazy to see the amount of attention they got just because the looks that they portray. But that’s what sells. That’s what’s going to make the company money and in return I guess that’ll make me money in the end, in the long run.”

Tecia Torres has said in the past that she would not grant Paige a rematch, however, due to VanZant’s recent success, “The Tiny Tornado” has changed her tune:

“She’ll get a rematch and I’m going to do exactly what I did last time — I’m gonna dominate her,” Torres said. “I think she’s doing well, but I just think that my fighting style for Paige is what you have to do. Felice could have beaten her, I think. She should have worked her striking, in and out, get those points. Instead she wanted to clinch, tie it up with her and Paige is a much better wrestler than Felice, so she lost.”

Would you like to see a Paige VanZant vs. Tecia Torres rematch put together by UFC officials? Sound off Penn Nation!