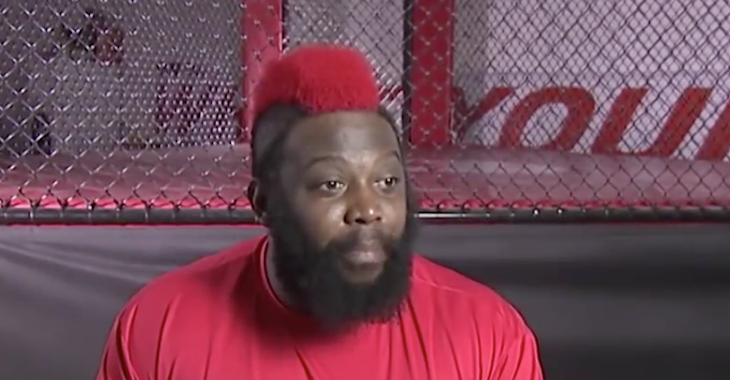 By now you have probably watched or at least heard of the documentary ‘Dawg Fight’. It follows the lives of backyard brawlers, putting on shows and trying to chase a better life.

The main character in the film is Dhafir Harris, or more widely known as Dada 5000. Dada ran the shows that were put on in his mothers backyard, he was the promotor, the manager and the referee for the event and the fighters.

Dada made his name from fighting himself and from being one of Kimbo Slice’s bodyguards. Now, he’s ready to take things to a whole new level with BYB Extreme Fighting Series’ Battleship 1.

The event, which will air LIVE on BJPENN.COM on Friday night at 9 PM ET, will feature eight exciting fights and take place on a cruise ship in the middle of the ocean. Fighters will be fighting in a custom triangle shaped cage, built small to promote combat.

We caught up with Dada and talked to him about the event.

“Being a product of my environment, we’re always thinking about how we can put ourselves in a position to live the life that god intended. Because we look at what we have around us and it’s often messy, so we created something out of nothing and we created opportunities for individuals to do certain things and that door was open through backyard fighting. So to do it on a ship now is just apart of the evolvement from the yard.

“I think I’ve brought more awareness to the culture and got more acknowledgment out it than anybody in the past 150 years before me, so it was only right that we raised the bar. Not only have we raised the bar, but we’re standing on it.”

“We wowed the world for many years inside the backyard. We’re our only competition, so it’s about us challenging ourselves.”

“We’re going to take it to the ocean and this is pretty much like bringing a new definition to the term ‘a fresh breath of air’.”

Q: Why Should Fight Fans Tune In?

“Are you content with where boxing is at right now, or where MMA is at right now? Do you want to see action packed fights with thrills and chills and with awesome knockouts? Then BYB Battleship 1 is your deal. This is where you need to be.

“This is the premier fight league, with old world tradition. History repeats itself and it’s our time once again.”

Q: What About The Average Fans Who Watch boxing and MMA?

“We’re the gray area between MMA and boxing, we can’t be compared to any of that. We don’t fight we brawl.”

“Tune in tomorrow night and you will be made into a believer.”