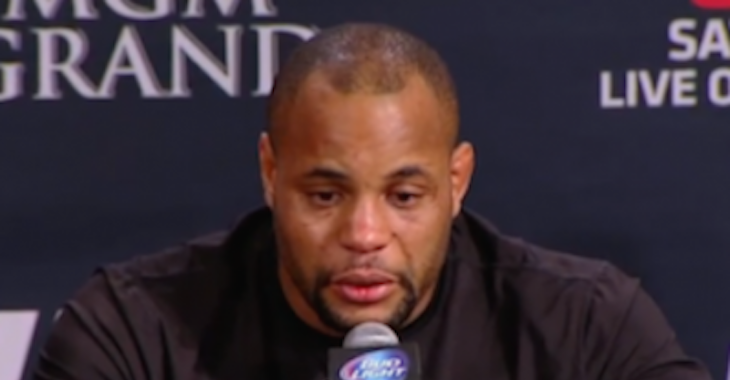 Yes, the sport of MMA has its trash talk and its rivalries and its Dana White quotables, but every once and a while we get a truly ‘feel good’ story.

Daniel Cormier won the UFC light-heavyweight title this past Saturday when he survived an early onslaught from Anthony Johnson and came back to get the submission win. Take all that Jon Jones talk away for right now and just let this guy enjoy his accomplishment. After all, he’s come a long way to achieve it.

“We had nothing. Salina and I had nothing,” said Cormier at the post-fight press conference, “She’s been with me since I had one fight. One time, we had our son, young baby. I was in Strikeforce, and I would barely fight. Salina and I had a 700-square foot apartment in San Jose, California—one bedroom—and we had no money. And my family has no money down in Louisiana. And I was so desperate because we had no gas, we had nothing.”

“We were on welfare. We called my parents, and they don’t have much. But my mom, my dad, my brothers and my sister—they pulled together whatever they had and they had $575, and they sent it to Salina and I. And it allowed us to actually get through the month until my next sponsorship check from Cage Fighter came. … It’s great to give this championship to my parents and my fiancee because now, we’re fine.”

You can call him ‘not the real champion’ or say all the stuff about him not beating Jones, but you can’t deny the guy continues to grind and pick himself up after so many beatdowns in his life. Cormier’s father was shot and killed when he was only 7 years old and his daughter tragically lost her life in 2003, in a car accident. I think it’s hard to say this guy didn’t earn everything he has.