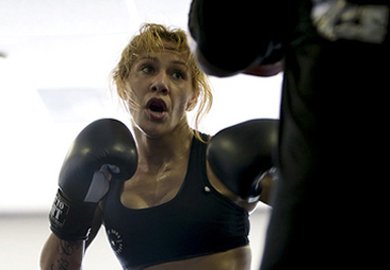 So the heated rivalry between UFC women’s bantamweight champion Ronda Rousey and Cris ‘Cyborg’ Santos is a well documented one. Both fighters have gone back and forth for some time now since they both had homes in Strikeforce.

Now, with Cyborg’s new contract with Invicta FC, she is apparently allowed to come over to the UFC whenever she so chooses and a shot with Rousey is likely to be her first fight, given the history. First she must get past Ediane Gomes on April 5th. Before her fight with Gomes, however, Cyborg has chosen to take another shot at the champ in a recent twitter post via Punishment Athletics.

Cyborg is shown wearing a ‘Ronda Will Be My B****’ t-shirt under the caption:

“RONDA’s new nickname is THE B****. Cris CYBORG will eventually knock you out cold”

Rousey defended her title this past weekend at UFC 157 against an extremely game opponent in Liz Carmouche and currently awaits a new challenger. With Cyborg tied up with another fight, however, it looks like we will have to wait just a bit longer to see this highly anticipated title fight come to fruition.