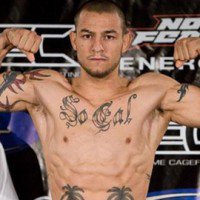 UFC Featherweight Cub Swanson has made is known that he isn’t as impressed as others may be with Dustin Poirier’s win over Jonathan Brookins back in December. And he expressed these thoughts on today’s edition of “The MMA Hour”.

With a three fight winning streak and all coming by way of KO or TKO, Swanson is looking forward to this fight as an opportunity to showcase his skills yet another time in the featherweight division.

His opponent on the other hand is looking for another win in a talent rich and ever growing division, a place where no fighter’s skill set should be taken lightly. Poirier came out after a tough fought loss to Chan Sung Jung and submitted Brookins at 4:15 of the first round, a choke which he was submitted by himself in his previous fight, showing the true meaning of ‘learning from your own mistakes.’

If Swanson is to make such a gain over Poirier he is going to have to do it with a little more effort than he believes. Poirier isn’t the type to give up a loss so easily and his 13-2 record can speak to that all on its own. Poirier is certainly looking to this fight as his chance to get a big win over a big named opponent. If Swanson isn’t careful he could find himself on the bad end or Poirier’s own 2 fight streak. The two will go at it this Saturday to jockey for possiton in the ranks of top featherweights.

A true fight for the fans goes down this Saturday Feb 16th, UFC on Fuel TV 7 at Wembley Arena in London, England.