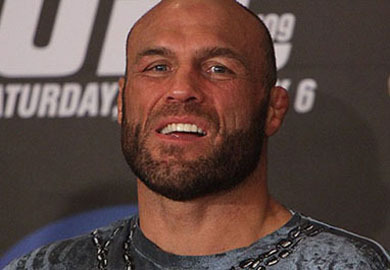 Former UFC heavyweight and light-heavyweight champion of the world, Randy “The Natural” Couture, expresses his favoritism for his ex-Team Quest partner and fellow wrestler Dan Henderson in his upcoming title fight against UFC king, Jon Jones.

Couture is not only a UFC Hall-of-Famer but also one of the sport’s most analytical strategists, he often see’s matchups in ways that others cannot. So is he onto something with this prediction of victory for Henderson or is this just a case of being loyal to a teammate?

Check out what “The Natural” told thescore.com:

“Obviously Jones is a tall order with a 96-inch reach [actually 84.5] and as athletic and dynamic of an athlete that he is, but I think Dan has two things going for him. One is that right hand, but two, at the end of the day it’s going to be that wrestling mentality — closing the distance, wading through Jon, taking him out of that long-range dynamic striking reach he likes and forcing him to wrestle,” he explained. “Dan was a two-time Olympic wrestler, and I think if he makes Jones wrestle and does it for five rounds he has a real good chance of winning that fight. (Plus) you may see an ‘H-bomb’ hit Jon Jones in the head at anytime with Danny, so I really like that fight for him.”