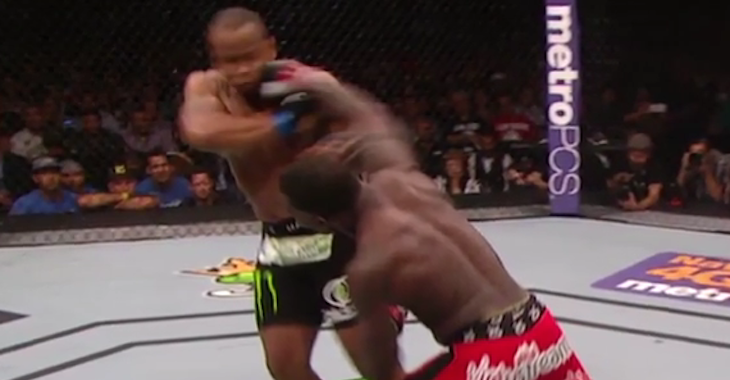 Daniel Cormier closed out an exciting night of fights with a submission victory over Anthony “Rumble” Johnson, giving him his second championship win in his short mixed martial arts career. In the opening round, Johnson rocked Cormier with a punch and sent him crashing to the mat which brought the crowd to their feet.

“Wow, I can’t believe I just got dropped, I never got dropped before,” Cormier told the Fox Sports 1 crew during the post fight show. “Not only is does this dude punch hard, he’s fast.”

Cormier kept his composure and tried his best to remember that exposing Johnson’s inability to keep up with him in grappling was the gameplan. “We knew he was going to press us, so when he landed the first big punch, it might have backfired on him because it gave him more confidence to try and throw more and then I was able to do some timing and duck under a punch and take him down.”

“The first round, our plan was to take him down, then grab his head if he tried to get back up, and make him carry my weight and wear him down,” Cormier explained. “He had to carry my weight the whole time. In the second round, I landed a really good elbow and he looked like he didn’t want to come back out in the third.”

Fatigue started setting in for “Rumble” and he was no longer able to make it back to his feet after getting taken down repeatedly in the third round. It wasn’t long before he gave up his back to Cormier who ultimately submitted him with a rear naked choke.