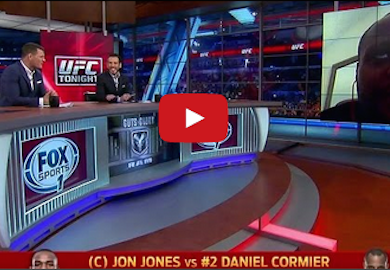 Daniel Cormier on when he found out about the Jon Jones title fight: “I got on the scale at 6:45 AM this morning because I had six donuts yesterday. Right then I got a text from Lorenzo Fertitta. I thought, ‘This can’t be good.’ Lorenzo offered me the fight. I got with my coaches we all agreed to it. We’ve got nine weeks to prepare, which is sufficient time.”

Cormier on if he hesitated before taking the fight: “There’s always going to be hesitation. You hope to have three months to prepare for a title fight, but if my coaches came to me and said I have to beat Jon Jones in five weeks, I’d do it.”

Cormier on getting a text from Jones: “Let me tell you about Jon Jones. He’s a ninja on a number of levels. I don’t follow him on Twitter, but somehow he sent me a direct message and he said, ‘I hope you’re ready to come to daddy.’”