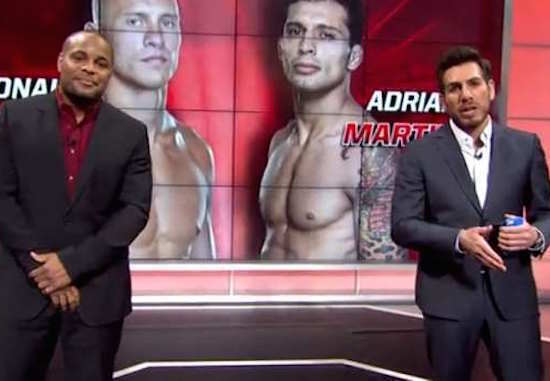 UFC TONIGHT Host Daniel Cormier on how Shogun Rua will look vs. Ovince Saint Preux: “I believe we’ll see a good Shogun Rua. He’s going to look like he did in the Dan Henderson fight. He looked pretty good in that one, and before that, he put a beating on James Te Huna. He has the ability to show his experience against a guy like OSP.”

UFC TONIGHT Host Florian on Shogun’s last fight: “He was landing his shots, doing everything he needed to do. But he lost his focus, got tired, and got hit with Dan Henderson’s right hand. He’s fighting smarter than he has in the past.”

Cormier on Saint Preux getting moved to the main event: “OSP is being thrust into a bigger fight against Shogun than he had. That doesn’t happen to guys who lost their last fight. He has a real big opportunity. His athleticism will carry him. The big gap between him and Shogun is his athleticism.”

Florian on Saint Preux: “There’s a lot of room for him to improve. He needs to take that last lost against Bader and make improvements. This is the type of fight that will take you up a level.”

Cormier on Ian McCall vs. John Lineker: “John Lineker needs to press him and go forward. But it all starts at the scale. In his last fight he managed his weight and he fought the best we’ve ever seen. He can’t allow McCall to use footwork and speed, and he needs to cut off the angles and find McCall’s body with big punches.”

Cormier on McCall: “He can wrestle, he can strike, he’s fast and he has the confidence. He needs to use his wrestling, use his speed, drag Lineker down and wear him down. He needs to move and move like he’s never moved before.”