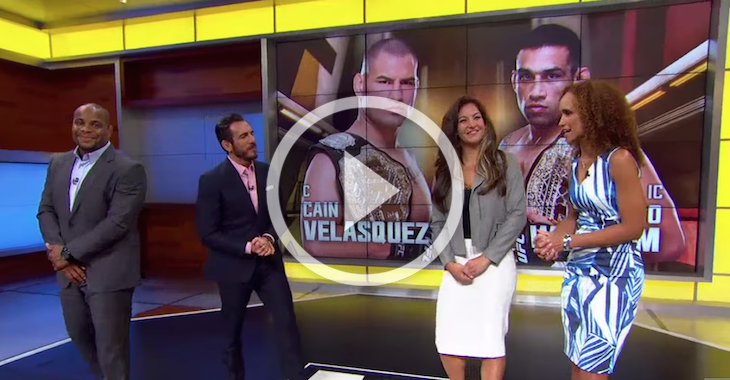 Our UFC Tonight analysts share their predictions for UFC 188.

UFC TONIGHT Host Kenny Florian on Cain Velasquez’s fighting strength: “This guy is non-stop action. His whole game is to pressure his opponent and make them suffer and see who breaks first. He’s one of the most exciting fighters in the UFC.”

UFC TONIGHT Host Daniel Cormier on Fabricio Werdum getting better: “Fabricio Werdum has gotten better with time. At 37, he the best we’ve seen him. He has confidence. We always talk about how important confidence is. What he did with Travis Browne, walking him down with his striking, was impressive. And then to knock out Mark Hunt was great.”

UFC TONIGHT Guest Host Miesha Tate on Werdum being underrated: “Don’t you feel Werdum has been highly underrated in all his fights? You never know what to expect. He could be showing up and showing new things in his game that could pose problems for Cain.”

Cormier on Velasquez’s keys to victory: “He has to apply constant pressure. He has to use his boxing. He keeps everything tight and crisp. He has to mix in takedowns – he can’t abandon his wrestling.”

Florian on Werdum’s keys to victory: “His first key is to control the distance. He’s got to keep Cain on the outside. He has to vary the attack and mix it up. And he has to look for a submission in a transition.”