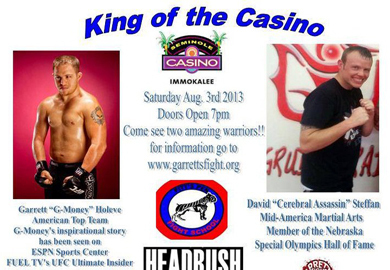 Last Saturday in Florida, Garrett Holeve, the 23-year-old fighter with down’s syndrome was supposed to face off with David Steffin. Steffin is a 28-year-old who was looking to compete with cerebral palsy.

The fight was set, the two trained for eight-weeks and five minutes before they walked out to the ring the promoter was served a cease and decist order from the state of Florida.

Florida’s WINK News has the details:

It was a fight that was supposed to be a first of its kind. One both Garrett Holeve, 23, and David Steffin, 28, had been dreaming of, but five minutes before the first punch, the state presented the promoter with a cease and desist letter.

“He cried. It genuinely upset him,” says Mitch Holeve, Garrett’s father. “He’s worked eight weeks in a training camp, training four and a half hours a day for eight weeks getting mentally and physically prepared to do this.”

Garrett has downs syndrome and his opponent David has cerebral palsy. The fight was supposed to happen because the match was being held on tribal land, but a letter from the DBPR says the scheduled bout between the two amateur fighters is unsanctioned and against Florida Law.

“He’s upset because he knows he’s being told he can’t fight because he has down syndrome and that hurts his feelings and that angers him” says Holeve.
What do you think? Should Holeve and Steffin have been allowed to fight?