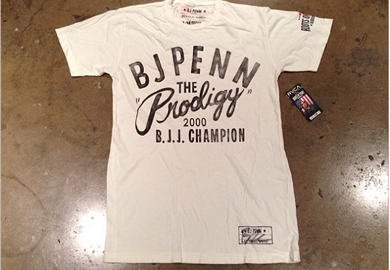 In 2000 BJ Penn  received his black belt after only three and a half years of training. A few weeks later in Rio de Janeiro he defied the odds and became the first non-Brazilian to win a black belt world championship.
This limited edition collaboration shirt withRoots of Fight celebrates that defining moment in the career of The Prodigy. Only 300 pieces were released a few weeks ago in Vegas. We did manage to put a few autographed pieces aside and will be giving one away in our #rvcasportprodigy contest.
To enter follow @rvcasport on twitter or instagram, post your pic and story of your defining moment and tag #rvcasportprodigy. Enter before July 31st and we’ll work with BJ to pick a winner on August 1st.
We know there are a lot of great stories out there about beating the odds and accomplishing big things, we’d love to hear them#VAsport #rvcasportprodigy #bjpenn #pioneer
This article appeared first on BJPENN.COM