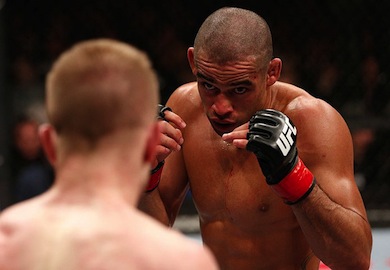 UFC Interim bantamweight champion, Renan Barao (30-1) has officially been removed from the main event of UFC 161. Dana White confirmed that he had been pulled Barao was scheduled to fight Eddie Wineland (20-8-1) in his second interim title defense.

Word of Barao’s injury was revealed earlier this week when the interim champion sustained a foot injury. Now, we know that the foot injury was a series of torn ligaments in his foot.

With UFC 161 just a few weeks away, the UFC will scramble to fill the void left by Barao’s absence. Urijah Faber has come out offereing to be a replacement for Barao. This would be a rematch of the UFC 128 co-main event as Faber beat Wineland in a three-round unanimous decision.

UFC 161 takes place on June 15th at the MTS Centre in Winnipeg, Canada.