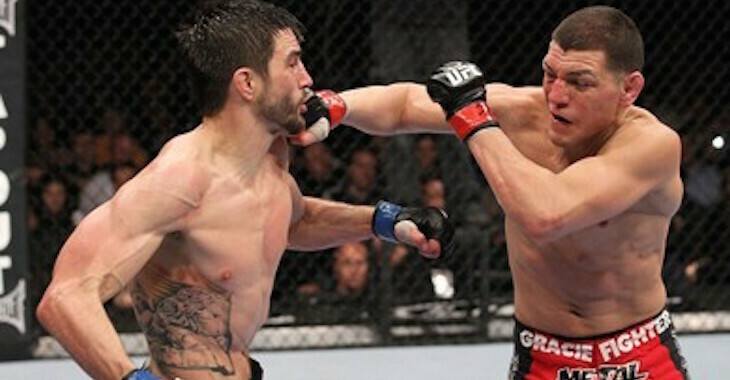 UFC welterweight Carlos Condit is preparing for his title shot against the champ Robbie Lawler, which will take place at UFC 193, in Melbourne, Australia.

Condit is coming off of an exciting win over the tough Thiago Alves, but still, there are those who think Johny Hendricks should be fighting Lawler for the third time. It seems Condit can’t please everyone, which is also the case with one of his past fights.

When Condit fought Nick Diaz at UFC 143 for the interim welterweight title, he managed to grab a unanimous decision win. Although, there are still those who say that Diaz clearly did enough to win, especially in the first, second and fifth rounds.

So, would Condit be up for a rematch in the future?

Here’s what he told The MMA Hour:

“Honestly, I don’t think anything short of a rematch with [Diaz] would change things in anybody’s mind. I’m not worried about it. I went out there and I got the win. And … I’ve said it in interviews in the past, I’ve agreed to that rematch a couple times. I don’t know if he’s ever coming back.”

“Fighting Nick Diaz comes with a lot of other stuff. There’s the fight it and of itself. Hey, it’s a tough fight. It’s a tough guy to gameplan against and to fight. But the fans and the social media aspect, all of that, I’d have to get my head right for that. Of course I’m not looking past Robbie Lawler, but if I get this belt, I’d like to avenge a couple losses to the next couple of guys who you mentioned earlier, Hendricks and Woodley.”

So, would you guys be up for a rematch in the future?