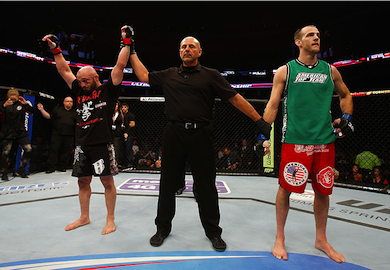 According the reports UFC featherweight fighter, Cole Miller, is looking to appeal his Saturday night decision loss to Many Gamburyan due to referee Yves Lavigne’s awkward first-round moment that gave Gamburyan a lengthy recovery period after questionable elbow strikes that were deemed legal blows after review.

At the culmination of the first round, the additional recovery time should have instead resulted in a TKO victory for Cole but that isn’t the way it played out.

“It was just real odd,” Miller told FOX Sports. “The referee didn’t give any indication the fight was over, he also didn’t signal it was a foul. I looked at Manny and then the ref to see what was going on. I had my hand on Manny in a sportsmanlike way to sort of encourage the process and get things moving.

Does Mr. Miller have a valid claim here?