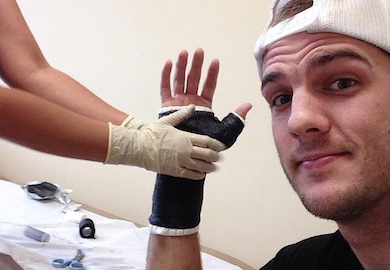 We learned earlier this week that Cole Miller was forced out of his ‘UFC Dublin’ main event against Conor McGregor.

A Fight-cancelling injury was the culprit, and Miller just took to his Facebook page to explain what happened.

“Today, after 11 years in mixed martial arts, I have had a first in my career. I have to pull out of a fight. I have not accepted fights in the past due to injury, but I have never pulled out of a fight due to one. Two weeks ago, in a routine training session, I tore a ligament as well as a tendon in my hand. I am unable to make a closed fist nor a grip. After consulting a physician I was told that it needed to be immobilized for at least two weeks with no striking or grappling or strength training. Following that period it needed to be re evaluated.After an MRI and seeing my hand specialist this morning, it was recommended to me that it be immobilized for another 4 weeks minimum with cardio being my only option to workout. After 4 weeks it is not guaranteed still I would be able to train or fight, but after that 4 week period of immobilization, it would be re evaluated once more. Not being able to train for 6 out of the 8 weeks needed for a camp and possibly even more of it has left me with no option but to withdraw from the fight with Conor McGregor. I apologize to the dozens and dozens of Magrinho Maniacs worldwide. Ireland, I am deeply sorry. You deserved to see the two of us fight on your soil.It would have been fireworks. I hope you believe me when I tell you how much I was looking forward to it. Conor, I apologize to you as well. I wanted to bring my “A game” to you, more than anyone I have been scheduled to fight against in my life. I know you would’ve forced me to bring my best. Lastly to the UFC, I am sorry. I was willing to do cardio ONLY for half my training camp, however when I was told it would be 2/3 of the camp with a possibility of it being my entire training camp, I was left with no other choice. The Doctors said if I didnt get casted I may never be able to make a proper grip with my hand ever again.

As for what is next…I am going to rest and recover my hand. I will not be able to strike, wrestle, grapple, or do most types of strength training. I am hoping to stay in shape and do some cardio training and triathlon so that way when my hand does heal I will be able to accept a fight to be scheduled around September or October at the latest. To the supporters I appreciate it. To the haters, trust me when I say I wanted to give you the opportunity to see me get knocked out more than ever.”