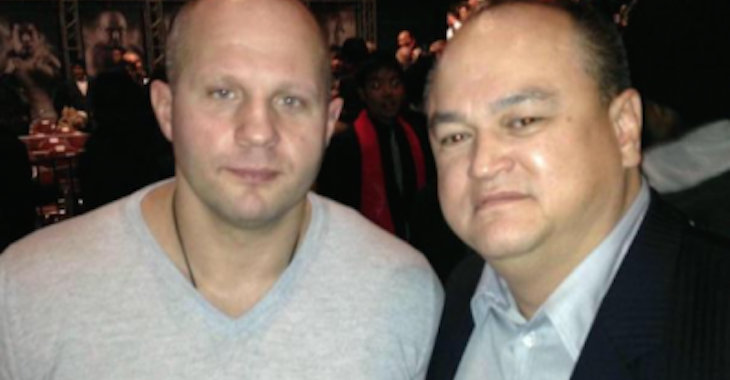 Bellator 141 goes down tonight on Spike TV. While doing some promotion for the event, president Scott Coker did an interview and was asked about Fedor Emelianenko.

“We’ve had conversations, but not about fighting. I just felt Fedor is a great legend. He’s on the Mount Rushmore of MMA. We had a great time doing the fights together with Fedor (in Strikeforce) … I felt like we’ve done it already with Fedor.”

“Let’s let him come back and see how it works out for him, and then maybe we’ll have him fight a couple years down the line, or next year, or whatever. The door is open, but I felt like at this point, Bellator is kind of on a little bit of a roll here. Would he add a lot of value? Yes. But we’re just going to sit back and see what happens.”

Of course a lot of people expected Fedor to end up with Bellator when he announced his return to the sport, mostly because of his past relationship with Coker, back in Strikeforce.

With Bellator out, does this mean the UFC is truly the only major option for Fedor?
The Best Training Room You’ll Probably Ever See — D.C., Rockhold, Khabib, Velasquez All Training For UFC Greatness
[ooyala code=”J5c3UxdzpDWlYbuxxRyJVVXCUwnYxE3R” player_id=”bd214e34cfad476984102de4bf5e8da2″ width=”1280″ height=”720″ auto=”true”]