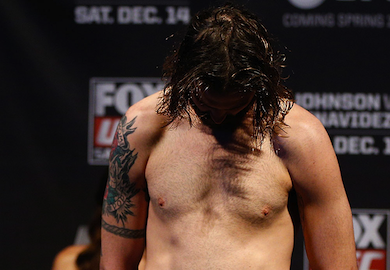 In another blow to the UFC’s roster, TUF season 12 fighter Cody McKenzie (pictured), recently announced his UFC release through his official twitter account.

The Alaskan native went 3-4 while under the UFC”s employ, most recently dropping an unimpressive bout to Sam Stout on the UFC on FOX 9 card.

Outside of his lackluster record, McKenzie battled with a questionable image that likely did him no favors when the UFC was looking to cut some fat.

At any rate, McKenzie is now on the prowl to get a new fighting home and he’s called out Aoki in the process.

Well Iam back on twitter, no longer with the UFC, and looking for fights promoters get at me!

I will be fighting in three weeks at 180 the next month at 170 then iam open will take fights from 145 to whatever, get at me. #grinding

Hey @SugarRaySefo you got a phone number so I can talk to you about fighting for WSOF?