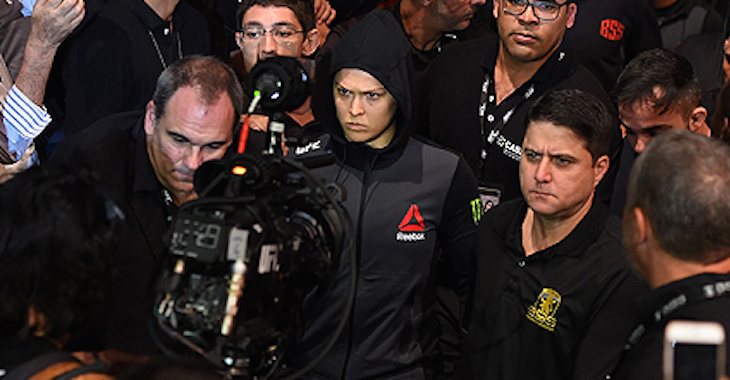 UFC bantamweight champion Ronda Rousey is excepted to fight Miesha Tate for the third time, but that hasn’t stopped the Rousey vs. Cyborg debate from raging on.

Ever since Rousey KO’d Bethe Correia in 34 seconds at UFC 190 all any one can talk about is a potential match up between the two dominant women. Even Sportscenter got in on the conversation, having Cyborg as a guest and asking about the fight.

Now, we have Rousey’s coach Edmond Tarverdyan, who talked to Submission Radio and said that he isn’t worried about the fight, if or when it does happen, because Rousey’s just the better fighter plain and simple.

“No. Ronda beats her in striking. She overwhelms people, she pushes her punches and she throws a bit heavy, you know, heavier than some of these opponents, but her opponents give up on her. Ronda’s knockout was a knockout this last fight.

“Everybody saw her hand speed, the power. On shot, boom. Out. That’s punching. And Ronda’s only going to be punching better from now on, definitely. So I’ve never been a fan of hers. I think she’s slow, she just overwhelms people because of what she’s been doing I think. And she can box a bit more than the others, and she’s been doing it longer and it doesn’t surprise me. Ronda is the better athlete. Ronda is quicker, stronger and faster. That’s it.”