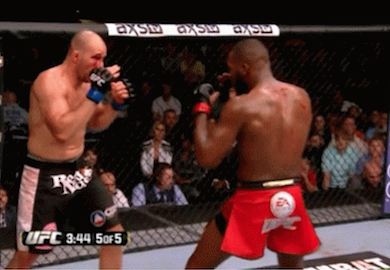 Early in the first round of the UFC 172 main event, Jon Jones used an old wrestling trick in the clinch that cranks the arms of his challenger, and apparently sent him on a downward spiral.

“So, just like when Tyron Woodley hurt Condit’s knee, and then they said, well, he fought him with a hurt knee – yah, but Woodley hurt his knee. Jon Jones hurt Glover’s shoulder in the tie up on the clinch against the cage, tweaked his shoulder and he hurt it. So Glover couldn’t use his right hand very well… You see me in the corner trying to get him to throw that right hand harder. He told me in one round, ‘Hey, can you get some ice on it?'”

“Sometimes he has shoulder problems, from training too much. He never said he has an actual torn ligament, or torn tendon. So we found that out afterwards. It was obvious, it was actually disfigured and swollen. You could tell there was something seriously wrong with it. He’s going to have an MRI Wednesday.”

“The fact that he fought with it… besides the massive, gaping cut above his eye. Right above his eye. And the thinks that he has a broken rib too. But it wasn’t. Again Jon Jones caused all these injuries.”