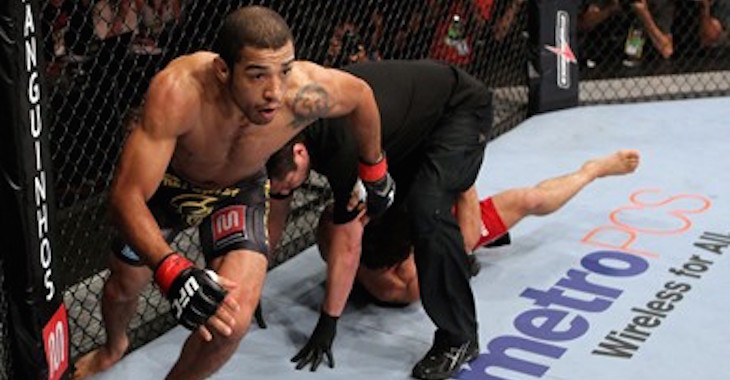 Jose Aldo vs. Conor McGregor is all good right, the fight is definitely happening still right? Not so fast.

As you may know, reports came out earlier in the week saying that Aldo suffered a fractured rib and might not be able to fight. After a few days of sitting around not knowing what was going on, the UFC released its own statement, saying that Aldo did not have a fracture, but a bruised rib and still planned on fighting.

Aldo’s coach, Andre Pederneiras, isn’t really sure which medical report to believe. The original one in Brazil says it’s a fracture, the reports from here in America say it’s just a bruise and Pederneiras just knows his fighter is in a lot of pain.

He spoke with Brazilian media during an event held last night and had this to say:

“There’s medical report here and an evaluation there. I’m not a doctor to say which one is correct. I know he’s injured and this rib injury is painful. He’s using anti-inflammatory and we will wait to see if he gets better.”

“If he can’t do any exercise to cut weight, he won’t fight at all. That doesn’t concern me at all.  He’s forbidden to do anything right now. If you move, the injury won’t heal, so he needs to stay to some rest. He’s used to pain but is feeling a lot of pain right now. It’s hard to fight at 100 percent.”

“I think Aldo is so superior it won’t make the difference. If he goes to the fight, he will win. I won’t put him in a situation that one punch can end the fight.”

Looks like things aren’t as peachy as the UFC statement made it sound. It sound like next week will be the next step in deciding if Aldo can fight or not, good thing the UFC locked down Chad Mendes.