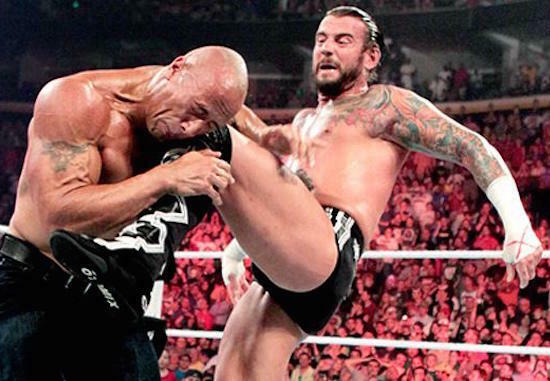 “...I’ve been getting beat up for most of my adult life. Pro wrestling is a lot different than MMA. Most recently, I had a conversation with King Mo, and he’s been training to be a pro wrestler, and he was like, “Pro wrestling is harder.” Now, that doesn’t make my decision to do MMA like, “Oh, this is easy,” because I know it’s not. I just know I’ve put in work in pro wrestling, and the work ethic you learn from doing that will translate for me. It will put me in a good position.

“…I definitely think pro wrestling’s more risky. The pro wrestler’s mentality, and it’s ingrained in them from the start, is you have to work hurt. And I know guys in MMA are banged up and will “work hurt,” but if you tear your knee up, you’re gonna get surgery. Pro wrestlers will not, because they’re afraid about losing their jobs. They will work through torn ligaments and everything, and I’ve done it and it’s not smart, and it’s not the healthiest work environment.

If I step in the Octagon and I get knocked out, I don’t gotta keep fighting. If that was pro wrestling, and I slipped and I fell and something happened to me and I got knocked out and I woke up three seconds later, guess what: I gotta finish this match. That’s just the pro wrestler’s mentality, and I’m glad I don’t really have to be subjected to that anymore. Imagine if an MMA fighter fought four-to-five nights a week. That’s essentially what I was doing in pro wrestling. Obviously, there’s big differences between a real fight and a fake one, but it’s a lot more wear and tear on your body, the travel is brutal. So I won’t be doing that.”

In a recent chat with Rolling Stone’s Kenny Herzog, CM Punk compared wrestling to Mixed Martial Arts, and how they vary.