Lewis and Gane are both coming off of recent Octagon victories.

‘The Black Beast’ extended his current winning streak to four in a row on February 20, scoring a sensation second round knockout victory over perennial division contender Curtis Blaydes. Prior to sleeping ‘Razor’, Derrick Lewis (25-7 MMA) had earned victories over Aleksei Oleinik, Ilir Latifi and Blagoy Ivanov.

As for Ciryl Gane (8-0 MMA), the undefeated Frenchman is coming off a unanimous decision victory over Jairzinho Rozenstruik in his most recent effort two weeks ago. Although the contest was not the most fan friendly affair, the result solidified Gane as being a top contender at heavyweight. 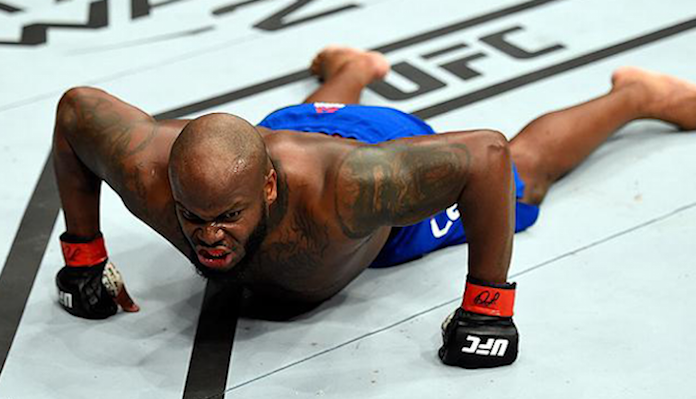 Derrick Lewis recently told Joe Rogan that he is looking to “stay busy” as he knows his time in the sport is slowly but surely coming to an end.

“I want to fight anyone who is ready. I know my window of time is closing to make money. I don’t have that much time left to make money, so I don’t want to just sit around.” Lewis explained. “I don’t know how the UFC wants to build up that Ciryl Gane guy or if they want to get him in there in the mix right away. I started getting tagged in the fight (clips on social media), because they said (Gane vs. Rozenstruik) still wasn’t worse than me and Francis. I’m like, ‘Damn. OK. Sh*t.’”

Derrick Lewis’ comments clearly made their way to Ciryl Gane, as the undefeated Frenchman recently took to Twitter to accept the proposed challenge from ‘The Black Beast’.

“Ok Derrick Lewis, I am down for it. UFC, Mick Maynard, let’s book it! #AnyOneAnyWhere” – Gane wrote.

Who do you think would emerge victorious in a battle between perennial heavyweight contenders Derrick Lewis and Ciryl Gane? Share your predictions in the comment section PENN Nation!