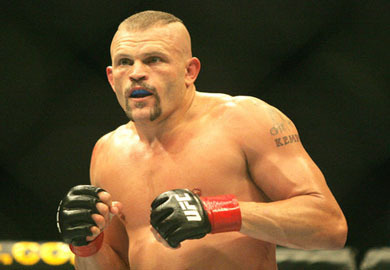 In a time where it seems that any loss in the UFC could mean your last fight in the Octagon, fighters have a justifiable reason to be tentative during a fight, if it means that they can coast to a victory.

Some notable cuts as of late have been Jon Fitch, who had arguably his most active fights in his last few outings with the UFC and hadn’t even lost two in a row, and Leonard Garcia, who is 1-6 in his last seven with the sole win coming by way of extremely controversial decision.  Two fan favorite fighters, one at the top of the division, and the other, bringing the fight to his opponent most of the time.

But the UFC seems to see a bigger picture on the horizon with its tuned up roster.

Now, former UFC light-heavyweight champion, Chuck Liddell, is speaking out against a slow fighter and urges them to look for the finish.

In an interview with UT San Diego, ‘The Iceman’ had this to say:

“I’d really have to talk to the guys to see if that’s really what they’re doing. I see it like guys are trying a lot more to just get their win so they can get their next fight. When we were doing it, it was a lot more about just going out and fighting. I hate hearing in a UFC corner ‘you won the first four rounds, just stay away from him this round.’ The guy doesn’t have a knockout punch, hasn’t taken you down the whole fight, why do you have to go be afraid of him? Go out and win! Make it exciting, go knock him out, finish the fight.”

These words come from a reliable source when it comes to finishing fights as Liddell built a career on doing just that. Will his statement fall on deaf ears, however? As fighters struggle to keep their jobs at the mid to lower levels of the sport, will they test their luck on finishing fights or at least participating in entertaining ones, or will they instead focus solely on winning no matter what the fans or UFC brass thinks, just to secure that next fight?