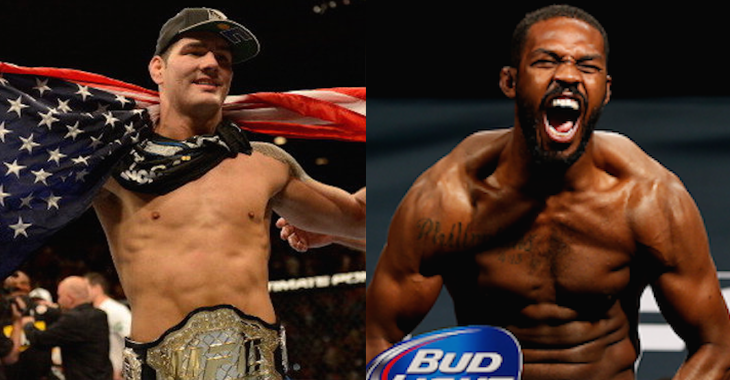 Super fights were the topic of conversation throughout 2013 and 2014. With names like Anderson Silva, Georges St. Pierre and Nick Diaz floating around, super fights could have been a dime-a-dozen. After the debacle that was UFC 183, there was one super-fight above the rest that the fans wanted to see no matter how stacked their own divisions were: Chris Weidman vs. Jon Jones.

There was a time where both of these men dominated their divisions with gold around their waist. Weidman did the unthinkable when he dethroned “The Spider” not once, but twice. Jones was doing his thing in the light heavyweight division building a twelve fight win streak. The scary part is that they likely weren’t even at their peaks yet.

Both Jones and Weidman expressed interest in fighting each other in the octagon, but Jones’ arrest temporarily put a halt on all super-fight talks. Now, Weidman is back to mentioning Jones’ name and says he will not retire until he fights Jones.

Weidman aspires to be the best mixed martial artist he can possibly be and he believes defeating Jon Jones will get him to that level. “That’s nothing against Jon,” Weidman said. “It’s just because I’m a competitor. I want to fight the best possible people. I want to have the biggest challenges in front of me and conquer them… That’s why I wanted to fight Anderson Silva when nobody else wanted to fight him. I want the biggest challenges. I want to beat people who people think I can’t beat. And Jon is definitely going to be one of those guys.”

Of course, Jones will have to settle his April arrest for a fleeing the scene of an accident in April. Until then, we can only dream about how this fight would play out. Weidman is hoping Jones can get his act together so the fight can take place.

“He’s an amazing athlete and he’s accomplished so much,” Weidman said. “So I hope he gets his stuff together and he comes back.”

Who do you think would come out on top in this encounter? Share your thoughts in the comment section below!