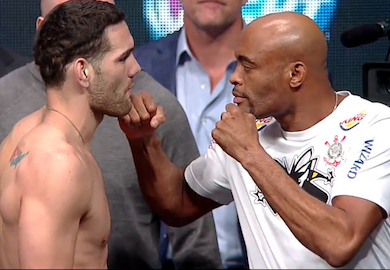 Chris Weidman has been high in-demand with the media ever since he defeated Anderson Silva at UFC 168. The UFC Middleweight Champion is doing a good job dealing with it however, and is responding to the tough questions with honest answers.

In a recent interview with Lance Pugmire from the LA Times, Chris Weidman shared his thoughts on how another fight with “The Spider” would go.

Weidman explained, “I honestly would feel bad to fight him again. I know he’s going to be a little hesitant to kick me. He has to worry about getting knocked out. I’ve dropped him twice, knocked him out once. And I don’t know if it’d even be a fair fight to take.”

Chris Weidman perfectly checked one of Anderson Silva’s leg kicks at UFC 168 and shattered “The Spider’s” leg in the process. Despite being the underdog walking into the fight, Weidman fought with the perfect gameplan and was well on his way to another dominant victory regardless of the freak accident. There will always be fans and media that ask their “What if?” questions, but Weidman is doing the right thing by addressing them with confidence.

Chris Weidman’s second defense of the UFC Middleweight Championship will be against Vitor Belfort. Details are scarce on when and where the fight will be taking place, but Lorenzo Fertitta mentioned he wants Las Vegas to play host to the bout.