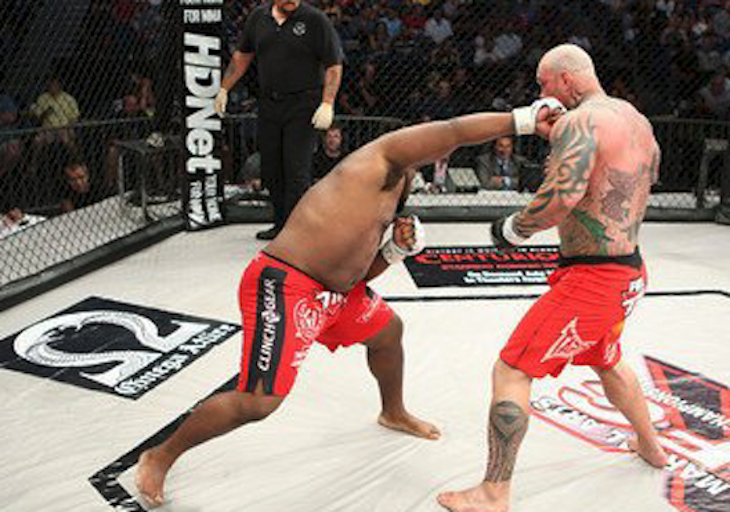 It’s not everyday that you see heavyweights doing cartwheels and spinning kicks after a victory inside the cage. So, now imagine a super-heavyweight pulling off those nimble techniques. It’s a hard thing to picture, but it is real. All you have to do is look up Chris ‘Huggy Bear’ Barnett.

Barnett, who fights at Japan’s year-end event, IGF’s Inoki Bom-Ba-Ye 2014 in Ryogoku Kokugikan, Tokyo, Japan, Japan, is currently riding a 6 fight win streak and spoke with BJPENN.COM about his upcoming match against Shinichi Suzukawa and his plans for 2015.

Barnett’s win streak started back in 2010. After winning two in a row he went on a hiatus for nearly three years. The super-heavyweight said that his long layoff had to do with a promoter who wanted to prove a point, that his promotion could succeed without a star fighter like Barnett. Overall though, Huggy Bear feels positive about his time out of the cage, “It was a complete positive. I was able to grow up as a person, as a fighter and everything.”

Barnett has fought 4 times since coming back earlier this year. When asked how he felt about going from no fights for three years to what will be 5 in one year, Barnett had this to say:

“I love it I love fighting,” said Barnett, “if I could literally fight every month, if my body would allow me, I would fight every month. I’ve never been the type to have long injuries. I don’t want to say I’m like Wolverine and I heal quick, but I’ll get hurt and as long as I have a good little-like a week-window, then I’m not going to back out of a fight.”

He feels honored to be apart of the big year-end event, which features Mirko Cro Cop vs Satoshi Ishii as the main event, and thinks of it [being asked to participate] as a confirmation that he’s doing something right.

“It’s amazing, it’s an honor, I’m glad I did whatever I did in my last fight for them to bring me back. Just to be put in the same sentence as like half the people on this card, it just makes you sit back and be like ‘wow I’m doing something right and people are seeing me’, and now it’s just time for me to push it even more and be more exciting and more entertaining if they’re bringing me out for something this big.”

Barnett said he does feel more pressure to go and be exciting, since that’s what the Japanese fans seem to be drawn to, but he thinks he performs his best when he’s in those situations, so it will only benefit him.

“What I’ve learned, especially about the Japanese fans, is they’re all about heart, if you go out there and you’re giving your all and they can feel and they can see it, they’ll love you, they want you back.”

“This is the kind of fight you risk doing a flying superman off the top rope, this is a fight where you go in there and literally lay it all out on the line no matter what, because win, lose, draw, or you fail doing that, it looks great and the fans see that you tried, they see that you went all out for it. So that to me, as far as entertainment, is the whole goal. I’m like a cooking pot man, and when there’s a lot of pressure I pop and that’s a celebration for everyone.”

Barnett then addressed his desire to get down to 265 pounds in order to make the heavyweight class, “That’s the goal, the overall goal is to get back down to 265.” He continued, “2015 I’m shutting the 265 heavyweight class down. To be honest with you Bellator is exactly what I’m looking at.”

Barnett ended with this prediction of his fight on December 31:

“It’s going to end in the first round. I don’t want it to end fast so I’m going to have fun, I’ll say my first two minutes and thirty seconds, maybe three minutes in, I’m just going to have fun. Everything you’re used to seeing me do, I’m literally bringing that back tenfold. We’ve been working on some ‘secret moves’ I’ll say, and it’s going to be almost like a movie. I’m putting the Matrix out there on them.”