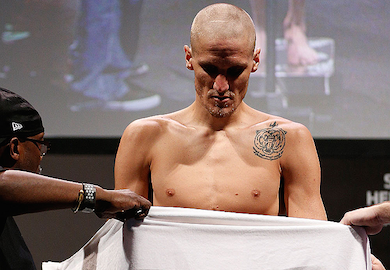 After making weight and going through the motions of fight night, UFC Fight Night 38 competitor, Will Chope (pictured), has been released by the UFC and had his fight against Diego Brandao cancelled on less than a day’s notice.

This sudden shift to tonight’s card comes on the heels of a report released by Bleacher Report citing several instances of domestic abuse and violence from the fighter, including a discharge from the U.S. Airforce due to violence.

The UFC, not pleased with the fighter’s violent past, opted to remove him from their roster without a second thought.

Tonight’s ‘UFC Fight Night Natal: Henderson vs. Shogun’ event will go down without the presence of TUF winner, Diego Brandao, but the UFC recently confirmed that he will receive his show and win bonuses regardless.