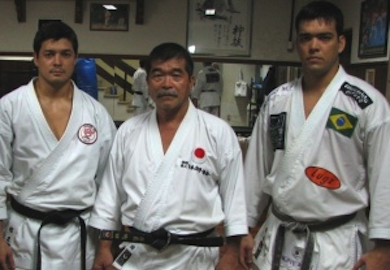 “I was doing well, then I connected the knee and it was over. It was a nice knockout. Everybody’s talking about it. I was focused to get the win. I wasn’t worried to get a knockout or something like that. I went there to do my job, to do my best, and it all happened naturally.Lyoto and Kenny Johnson, my wrestling coach, told me that he was a wrestler, so that type of knee is a good way to counter against a wrestler. One week before the fight, Lyoto told me to work more on that. I trained it a little, but I didn’t train the way it happened in the fight.”

The older and much smaller Machida brother, Chinzo (left), is coming off of a highlight reel flying knee K.O., which happened last weekend at RFA 11.

With his sites set on the UFC, Machida gives credit to his brother, former UFC light-heavyweight champion, Lyoto Machida for setting him on the course for what was an amazing finish.

If you missed Chinzo Machida’s recent K.O. at RFA 11 than check it out here before going any further.